After three great months of blogging here, I’m going to be closing down Progressive Action Daily.  Real life has gotten pretty busy and I haven’t been able to devote sufficient resources to maintaining this site.  For more progressive news and action items, check out the great list of sites at the Action Alliance.  And thanks to all my readers for your support and engagement — it’s been really encouraging to see so many people coming together to support progressive causes!

Facebook has done good work for civic engagement by setting up reminders to vote in national elections.  Now, Flippable has organized a petition for them to offer similar reminders for local elections.   Please sign and share!

If you’ve gotten more involved in political activism since the election, particularly online, it’s important to realize that this may increase your risk of being harassed or even hacked.  The DIY Guide to Feminist Cybersecurity is a great primer on securing your online accounts — and is broadly applicable even if you wouldn’t consider yourself a feminist.  It has useful security tips for people ranging from the occasional Facebook checker to the journalist handling sensitive information.  While you’re at it, you should also make sure your home address can’t be easily found on the internet.

The Trump administration has opened up a survey meant to support their vendetta against the “lying media.”  It’s so transparently partisan and incredibly badly designed that it’s sort of hilarious.  Fill it out (with a fake email if you’d prefer) and let them know that media organizations are working in the public interest by covering Trump’s many lies and conflicts of interest.

If you’d like to learn more about the history of immigration to the US and current policy options for improving our system, the National Immigration Forum should be your first stop.  They’ve got a lot of great resources, and offer opportunities for employers, faith leaders, law enforcement, and ordinary citizens to work together for a better immigration system.

MALDEF, which originally stood for the Mexican-American Legal Defense and Education Fund, is one of the country’s leading civil rights organizations working for the broader Latinx community.  Many of the people being targeted by Trump’s immigration policies are originally from Latin America, so now is a great time to support organizations like MALDEF with a donation.

Why are there so many undocumented immigrants in the US in the first place?  Economic and political crises in Latin America obviously give people an incentive to emigrate.  However, as Daniel Connolly writes at PRI, our own restrictive immigration policies have also played a role.  As he notes,

Away from the borders, the federal government rarely enforces immigration law. Why? For one, businesses want a reliable, low-cost work force. But for years, immigration has been so politically explosive that Congress hasn’t increased the number of legal visas.

The solution: tolerate illegal immigration. Both Republican and Democratic presidential administrations have quietly permitted the continued presence of people — particularly Mexican immigrants — who managed to enter illegally or overstay visas.

“If there is one constant in US border policy, it is hypocrisy,” Princeton University scholar Douglas Massey and colleagues wrote in their 2002 book about Mexican immigration, Beyond Smoke and Mirrors. “Throughout the twentieth century the United States has arranged to import Mexican workers while pretending not to do so.”

Prior to Trump’s increased law enforcement, immigrants who were not stopped near the border on arrival and who did not commit any violent crimes were highly unlikely to get deported.  The risk of coming to work in the US without documents looks more reasonable in this light. 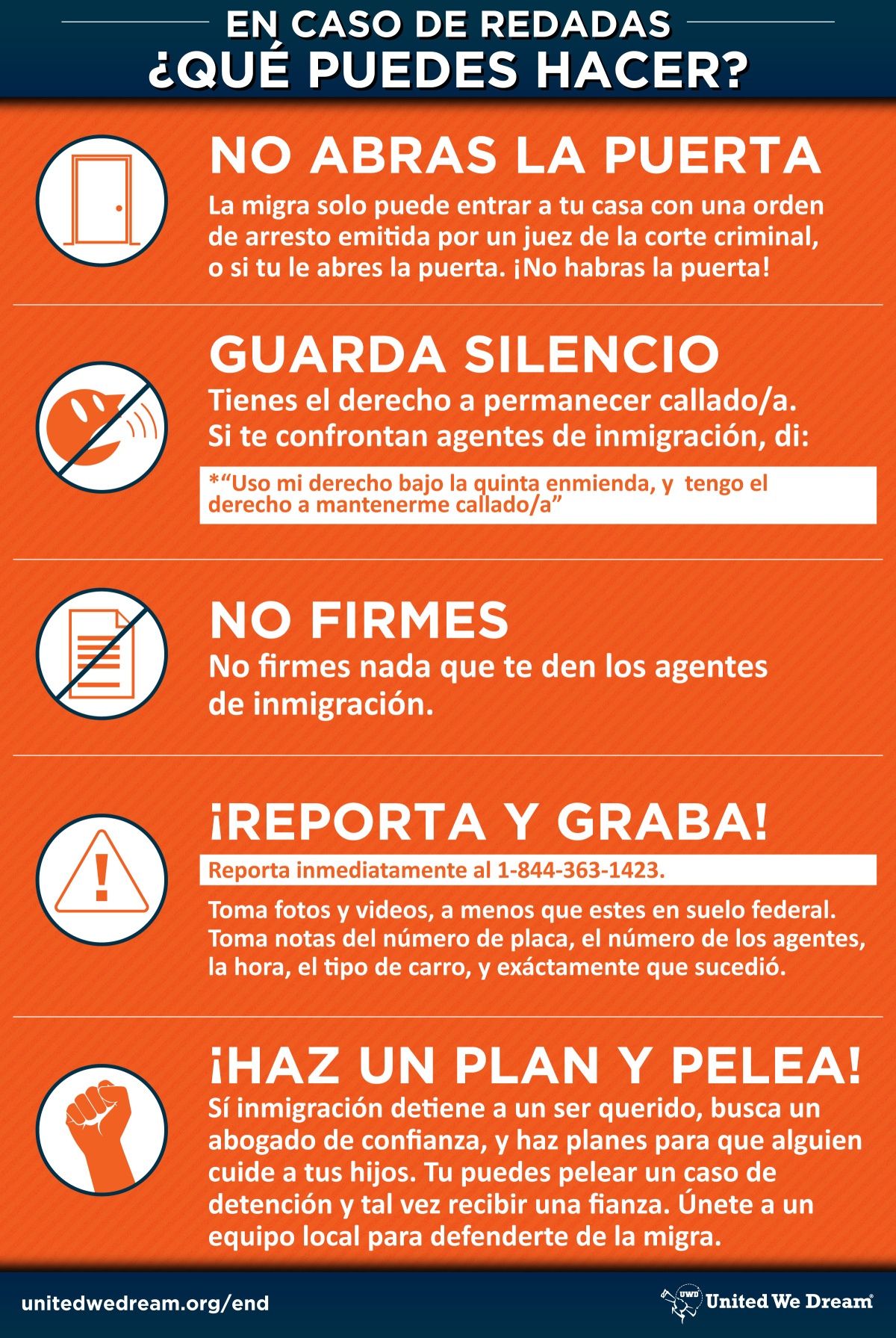 If you’re undocumented or know others who are, check out United We Dream‘s deportation defense cards, which specify the rights that immigrants have in encounters with ICE.  They’re available in English, Spanish, Arabic, Chinese and Korean.  Save a copy to your phone and print out others to distribute.

The Trump administration has ordered Immigrations and Customs Enforcement to step up deportations of all undocumented immigrants, even those not suspected of any violent or drug-related crime.  One of the first casualties was a woman in El Paso, Texas, who was deported when she went to court to ask for a restraining order against an abusive ex-boyfriend.  It seems likely that the ex-boyfriend tipped ICE off to the location of her court hearing, according to the Washington Post.  It’s the perfect example of how this disastrous policy promises to uproot millions of people without doing a single thing to make our country safer.

By now you’ve surely seen a theme in much of what’s been shared here: calling your representatives and trying to meet them in person is more effective than signing online petitions.  However, this doesn’t mean that petitions are useless!  At the Monkey Cage, Daniel Carpenter notes that they have several benefits for both the signers and organizers of the petition.  Most notably, petitions help activist groups create lists of potential members — and many people get their start in activism simply by putting their name on a petition.  So don’t feel badly about signing the next petition that comes through your inbox.